There can be only one.

The early nineties saw a huge spike in collectible trading card game due to the rise of magic the gathering. During this time everything was made into a collectible card game (CCG) in the hopes of making money on the success of magic. Curious to see if any of these games were any good, I went though a list of all the games that have been made (https://en.wikipedia.org/wiki/List_of_collectible_card_games)  and highlighted some that have interesting themes so that Caroline and I could try playing them. I thought it might be interesting to try and run through of some of these lost classics or forgotten duds. The only difficulty is trying to track these games down. It is challenging to find some of these card games now, even on ebay some of them do not seem to exist any more (perhaps for good reason - we shall see).

To kickoff the challenge of collecting CCGs, I managed to find a copy of Highlander the card game (first edition - there are two). Of course I had to buy it, for "research" (I couldn't possibly let you, the reader down). So, I bought several packages of them (all that seemed to exist in my area).

At home, the first thing I did was check online for any tips and tricks to building decks for this game, but there was nothing! While I was looking I found a youtube video about the second edition of the game and that was all. It seems the second edition has a bit of a following but the first edition was simply lost in the shuffle of the many card games made at the time (pun intended). So, no further ahead, I went through some of the card and rules (which fortunately came with the cards) and started building decks. I needed at least two decks, one for me and one for Caroline. Based on the cards I had, I build a Connor Macleod and a Nefertiti deck. I have included pictures of each. I chose these two character based on the number of character action cards they had.

The game mechanics are interesting for this game. Players have three types of cards in their hand, attack cards, block cards, and special cards. Each turn you have an attack phase and a block phase. The player who is attacking will play an attack card and hope that the other player won't be able to defend that specific attack. The attack and defense cards have a 3 by 3 grid on them where two or more of the squares are highlighted. The highlighted squares indicate where the attack will hit or if it is a defensive card, where it defends. Special attacks will allow you to do something extra, like play an extra hidden attack card or try and remove your opponents weapon. The objective of the game is to "take your opponent's head", this is achieved by striking when they have no health. In this game, health is measured by the number of cards in your hand, every time a player attacks and hits, your hand size shrinks and you can only draw up to the number of cards in your hand. Until there is only one highlander!

After playing our first game of Highlander, we decided maybe there was a reason that this game was lost in the 1990s. The artwork was pretty classic 1990s, consisting of stills from the television show which was pretty fun as a fan. But while it had some good nostalgia value, we found the mechanisms a little clunky (they did get better the more we played though). The best part was the fight sequences, playing attack and defense cards went quickly once we got the hang of it and it was fun trying to randomly pick a card hoping your opponent didn't have the same defense card. By far the worst part of the game was the special cards that required a power up - even by the end of the game we couldn't determine how these were supposed to be played. Checkout below how Caroline and I scored the game, and who was victorious.

If you found this post interest, check back for more CCG blog posts. I have already managed to track down  some Star Wars cards, two packs of Vampires, Rage, and a couple others!

The winner of this game was *Caroline*

On a fun note:
If you are interested in collectable card games there was a magazine called Scrye that ran from 1994 until 2009. I am going to try to hunt down some of these issues on the cheap and see if any of the ads are helpful at all for finding some of these forgotten treasures. I'll post some pictures if I manage to find any. 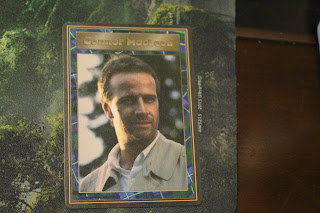 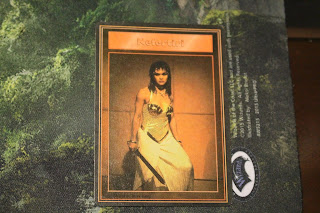 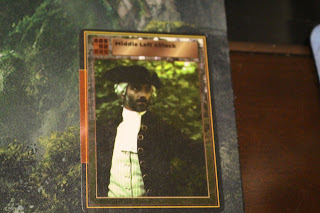 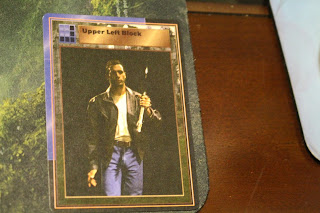