What's in the Box?
The review copy of Sheep Hustler  that we received from MAD games included the following: 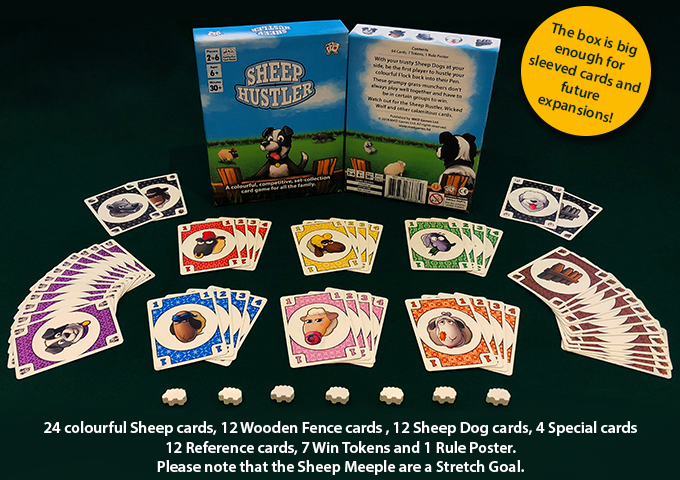 As this was a review copy, it is possible that the components that we received will be different from the final copy, but let's take a look at what was in the box. Sheep Hustler came to us as a game that appeared ready for final production. The cards were well put together, with easy to read numbers and cute, family-friendly sheep artwork. While some of the cards could have used an explanation on what the card's special power was, the designer decided instead to keep the card design neat and simple and provide players with reference cards instead which seemed to work.

In Sheep Hustler is a 2-6 player game, where each player is trying to be the first to herd their sheep back into the fenced off area. The game plays as a sort of combination of games like Uno and Go Fish, where players use special power cards to mess with their opponents and try and either pick up the sheep they are looking for or steal them from their opponents. The game relies on set collection and hand management, where players will win the round by collecting 2 fence cards and the right combination of sheep cards.

The game is played over 7 rounds where players will do one of four things on their turn:


Each round of the game plays an undefined number of turns until a single player collects a proper set of sheep and the required fence cards. Sheep can be a single colour pattern (1-4 of any colour), alternate colour pattern (1-4 in two alternating colours), mix up pattern (1-4 in four different colours), matching number pattern (the same number but in four different colours). Once the round is over the winning player takes a sheep meeple and another round begins until all 7 sheep meeples have been claimed and then the player with the most sheep wins! 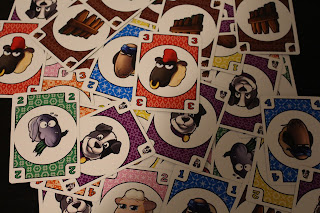 How it Played?
Sheep Hustler was a quick game to learn and to play. Similar to other quick card games, the rules came rather quickly, other than the special cards which took a couple of games to master.

We played this game as both a two player and a four player game. As a two-player game, it suffered quite a lot from players constantly battling out for a card. For example, I would take Caroline's card and then she would take it back from me because she knew I needed it. As a four-player game, this didn't happen as much. We played with our nine-year-old niece, and even though it can be tough to drag her away from her iPad/cellphone/computer (usually all at the same time), it seemed to keep her entertained for a while. The game drove me crazy sometimes when I almost had a complete set and someone would take a card from me and win the game when I was so close but I guess that's what I got for leaving my cards unprotected in my paddock. 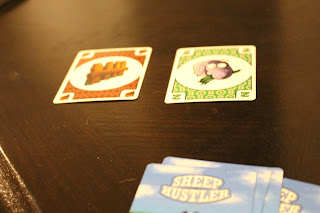 Food for Thought
Sheep Hustler is a family friendly filler game that offers a fun experience that will keep players laughing as they steal your sheep again and again. With great artwork featuring cute dogs and sheep, this game is sure to have you wanting more.

While the game doesn't offer anything new in the way of mechanics, it does allow for an interesting twist on some classic card games such as Go Fish and Uno. Similar to those games, it can play at a lower player count but shines at a higher player count. As we said above, we found when we played it by ourselves there wasn't much to stop players from battling it out for a single card which took away from the game and became quickly frustrating. This issue seemed to lesson at higher player counts when there was more going on. The dynamic of having a paddock and a flock made for the addition of a little more strategy as players could see what was in your paddock making it a guaranteed steal for your sheepdogs. This left players with an interesting choice regarding what they were going to leave in their paddock, hoping not to leave something the other players needed. 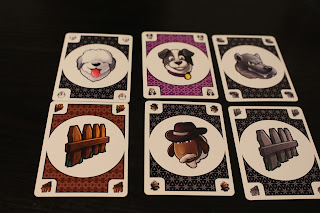 Final Thoughts
While Sheep Hustler may not be for everyone, this game has a lot to offer. Perfect for young families, this game offers cute artwork, fun player interaction, and simple fun. This game would be great for younger families looking for something new and a little different from the classic card games. The game is quick to get to the table and easy enough to learn/play. Based on its small footprint, this game would also make a great addition to the suitcase when looking for games that would be great on the road. Find this 2-6 player game on Kickstarter starting later this week for 16 GBPs.