What's in the Box?
Robotech: Force of Arms comes with:


Robotech: Force of Arms presents itself in a small box, with the layout of your typical filler game - some cards, and rulebook and some tokens to be punched. That said, the components themselves were well made. For example, the cards are made of a thicker card stock than normal, making them a little more durable for play. The artwork was cool and while we aren't familiar with the IP, it seemed to match what a Robotech fan would expect to see. Lastly and most importantly the cards were set up in a way that was not only easy to understand but also helpful for gameplay. The only thing we struggle with was reading the rulebook. While it made more sense after our second read through, we definitely struggled a bit at first. 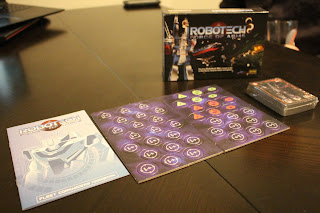 Robotech: Force of Arms offers players a two-player strategic area control, "take that" game that is surprisingly thoughtful for such a little package. The game is played over a number of phases where players try to either defend earth (Robotech Defense Forces) or try to destroy the earth (Zentraedi). The game is broken into a number of different phases: 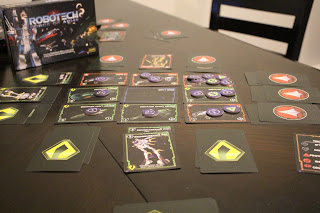 How it Played?
Robotech: Force of Arms gave us a bit of trouble with the rulebook, but once we figured out the scoring section the game played really well. While Cody didn't find the game very strategic, I found it was very strategic, especially in the Tactical Phase. During the Tactical Phase players place Fighter Cards face down for the most part which leads to a bit of a guessing game because you don't know how much attack/ defense your opponent has played. This can lead to a lot of strategies because players will try and move ships to provide the best defense/attack power, and the other player will try and move the ship back or to a new location. When we played the first couple of games Cody made fun of me, saying I had AP and was taking too long but then I crushed him winning all of the ship cards. In later games, he hit his stride and started using longer turns to develop more of a strategy for the protection of the earth and things started to turn around. 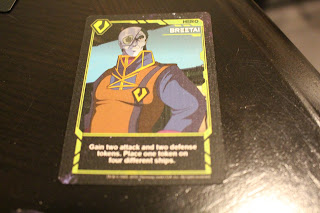 Robotech: Force of Arms provides a great game for two players, full of strategy and "take that" gameplay that doesn't get annoying. By having players place the majority of their fighter cards face down it gives players a chance to duke it out at a player count of two that doesn't just feel like a fight over a single card (Cody moves it, then I move it back, then he moves it back, and again and again). Instead, because players aren't exactly sure what the other has played one player might not be worried about the position of one ship while the other player might be, creating an interesting dynamic that isn't often seen with these mechanics at a player count of two. 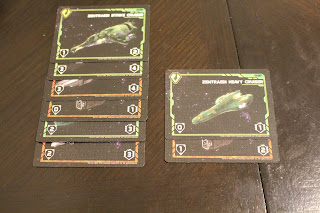 Final Thoughts
Robotech: Force of Arms is a big game packed into a small box. The game components were good quality and the game itself seemed to be representative of the Robotech IP. While Cody found it was sometimes frustrating not knowing what has been placed where and how many attack/defense points each sector of space has I thought this was an interesting mechanic. By having the cards be hidden from each other it allowed for more strategy than you usually get in a two player "take that" game. Instead of feeling repetitive and boring, it felt thinky and interesting. If you are looking for a new two player game and/or enjoy the Robotech IP be sure to check this one out!