A Foray into Game Design

We at Lost Loot Games have always thought it would be cool to design a board game (who hasn’t) and often find ourselves throwing out cool themes and interesting mechanisms for a game of our own, or discussing how a game could be better but never doing anything with those ideas. Last week this all changed! Feeling inspired after Breakout Con, a number of board gaming podcasts, and some youtube videos we decided it was finally time to dive into the world of board game design.
Oh boy did we end up a little over our heads! A week later we have a number of half started cue card games, unfortunately, no amazing Kickstarter. That said instead of burying the evidence and never trying again we have decided to embrace the saying if at first (or tenth) you don’t succeed try try again, and in doing so thought it would be fun to document and share for other aspiring game designers. 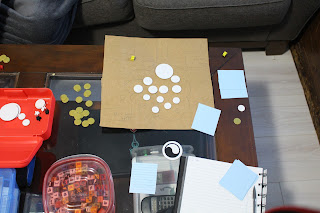 Depending on the type of game you are trying to design the supplies will be rather different and there are of course a number of places you can go to get board game design materials. We used a number of different resources some of which came from The White Box: a game design workshop in a box (from our LGS) and a number of craft supplies collected from places like Staples, Micheals, and The Dollar Store. We generally used: 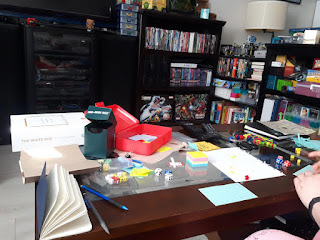 One of the best tips that we got at Breakout Con was to start small, and practice on games that you already own. The panellist used the analogy of a chef. You don’t become a world-class chef by opening a restaurant with no experience and expect to become an award-winning chef, instead, you start as the runt of the kitchen, cleaning dishes, peeling potatoes, and making soup stock. Board gaming he said was very similar, don’t start by trying to make the world’s best game or new mechanisms because it likely won’t work. Instead start by making new characters for already existing games, making a two-player variant of your favourite game, or by simply criticising games to get a better understanding of what works and what does. While Caroline thought this was really great, I was eager to start designing a brand new game (masterpiece really). So throwing caution to the wind we set off to make a new game instead.
To start we brainstormed ideas. We wrote down anything that popped into our heads, neat themes, cool mechanics, anything we thought would make a great game. Once we both had a theme or mechanic we liked we just started to design, cutting cue cards and cardboard to make cards and game boards – it all seemed easy and fun enough. Yet despite this quick start we still don’t have an award-winning game…

What went wrong?
What we quickly realized was that it’s never as easy or as simple as you think. What was a simple game in our heads was very hard to translate onto paper. It wasn’t until we had four or five games sprawled over our coffee table, wood cubes and dice in piles of confusion that we realized it might be time to save the idea for later and back up a little.
The theme might be easy to come up with or a really cool mechanic but the why or the how is substantially harder. We both managed to create a game were we doing things but there was no drive behind it, no reason for it, no complexity that made the game thrive.
I made a game where players were trying to create black holes via set collection but the game had limited challenge and no player interaction while Caroline tried her luck at a racing game that turned out to be very one dimensional and rather slow going (despite the theme). One of the most difficult things that we found about designing games is asking each other how to make the game better. Caroline quickly became frustrated when there was no right answer and I found it difficult to identify what needed to be changed.

Lessons Learned:
Without the world’s most amazing board game in hand, what did we take away from this experience?
-        Ideas are the easy part;
-        I really like cutting cue cards to make cards… Caroline doesn’t like that I abandon them all over the apartment;
-        Even a simple game can spiral out of control;
-        Not every game needs an auction (Caroline really loves this mechanic);
-        Take advantage of all the wonderful resources out there ( I especially love Board Game Design Lab)
-        Things don’t always work the same in your head as they do on paper.

Moving Forward:
Don’t worry, despite a bit of a failed attempt at board game design we aren’t quite ready to give up. Every mistake we make is a learning opportunity on what works and what doesn’t. For every poorly implemented mechanic, we will one day figure out what it needs to make it work. I have run into these types of issues before when I used to do creative writing and there was saying from Hemingway that always stuck with me, write drunk, edit sober. I feel like this is fitting for board gaming as well. Don’t think, when you start on an idea just go with it, write everything down, any rules, mechanics, all details, even if they don’t fit together the more the merrier and then test it and keep what works, cut out all the stuff that sucks or isn’t fun and go from there. Then hopefully you will have a fun game.

A way to further motivate ourselves, I think we will implement a game design competition between the two of us. We will both work with the same theme, and a number of restrictions (to keep us from getting too out of hand) and we what we come up with. Maybe by working separately on the same idea, our games will be able to inspire better ideas when we come together. This weeks theme will be a basic card game! Next week we will update on how we did.