With a sequel live on Kickstarter we thought it might be fitting to review Dice Throne Season One (check out the Kickstarter here https://www.kickstarter.com/projects/roxley/dice-throne-season-two). It helps that we managed to find a copy at our LGS (not that he wanted to sell it to us - more on this in a future post).

The Game:
Dice Throne is a Yahtzee style battle game where players go head to head against each other (1 vs. 1 or a team vs. team).   Each player chooses one of six characters, each with unique abilities/cards, fighting styles/ dice attacks. The dice are unique to each character which is really cool. The better your role, the better the attack/ ability but it is also possible that if you roll poorly you won't be able to attach/defend that turn (which can suck a lot).  The cards are semi-unique, some of them reference the special abilities and the backs of each deck has cool artwork depicting the character that it is for. However, most cards are similar for each deck things like re-rolls, wilds etc. The cards that are different are the ability upgrades which make your powers and attacks much better.

The game starts with each player having a total of 50 health points and two combat points. The objective of the game is to be the last one standing with HPs. The combat points are used to play cards that give players special abilities. Each round a player will draw a card, gain a combat point, roll for attack, wait for their opponent to roll defence, and then play any card or sell cards (for more combat points). The game ends when one of the player's health is down to zero (obviously). 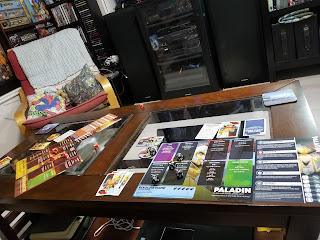 Since buying Dice Throne a couple of weeks ago it has made it to the table numerous times and has been a lot of fun. When we first started to play I wasn't sure that I really liked it. I thought that some of the characters were a little miss-matched but after playing all the characters I think it was just my strategy or lack thereof that was miss-matched.  On top of that, I found that I focused too much on upgrading my attacks and not enough time actually attacking which lead to a number, almost embarrassing amount of crushing defeats.

Despite my crushing defeats I still really like Dice Throne. The game does provide great artwork and cool customizable dice. It is a fun quick game that doesn't take much to learn or setup. This is definitely a game that will make it to the table again in the near future.

More on the Dice Throne Season 2:

Dice Throne Season Two is offered as a stand-alone game but will also be cross-compatible with season one which is pretty great! For those that missed Dice Throne the first time they can play the new one and for those fans who have Season One, Season Two will act as a big expansion, offering new characters to fight alongside your old favourites. They are offering 8 new characters, each with new and interesting attacks and abilities (the Artificer caught my eye). With four more days left in their Kickstarter campaign, it might be time to commit for those Dice Throne fans. Unfortunately for us Lost Loot won't be back this one - we already spent our allowance for this month on another Kickstarter project. That said we look forward to picking up a copy at our LGS when it hits the retail market next year.

Are you backing this project? Have you also spent your board game allowance for the month too? Tell us what you have added to the shelf in the comments below.