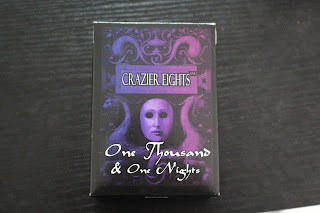 Whenever we get a new game to review we are immensely excited. This is no exception, we got the prototype for Crazier Eights: One Thousand and One Nights and we popped it open to examine the components.  One of the first things we noticed was how interesting the artwork is, it reminds me of old myths and legends. 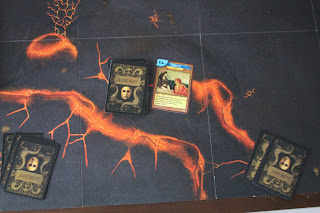 The gameplay is a cross between magic and crazy eights. While the cards are designed with four different suits and numbers much like a regular deck of cards, each card also has a special ability (event or asset). The cards can either be placed on the discard pile or played using the special ability as a single use (event) or lasting effect (asset). The game ends when one player discards down to no cards. 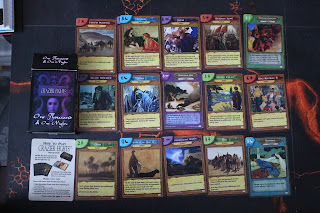 As we already mentioned, the first thing we noticed when we were unboxing the game was the spectacular artwork. It reminded me of the artwork used in the earlier versions of magic.

This game is an update of the Crazy Eights - a card game that most are familiar with. This makes it simple to learn and easy to teach to new gamers who need something simple to start off with. With the addition of the special abilities, it makes it possible to straddle your opponents with a bunch of cards or quickly discard down to a significantly smaller hand. Another great feature about this game is that you don't have to worry about not being able to affect people not directly beside you. Unlike regular Crazy Eights where you play a two and hope that your neighbour has another 2 so that someone else will pick up, even more, you can select who will pick up 2, to begin with. 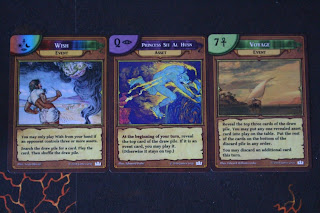 The one drawback that we really noticed was the amount of time it took to read the special abilities when we first started. At one point in a game, I made Caroline pick up 4 extra cards and it took her a few minutes to familiarize herself with the new cards, making the game take a little longer. That said, once you are more familiar with the game and all the cards, this won't be much of an issue.

Crazier Eights: A Thousand and One Nights also makes a great addition to your travel games, the size of a regular deck of cards makes it extremely portable but it also offers a little more depth than a normal deck of cards.


So pick you're preferred theme, a couple friends and enjoy!