What's in the Box?
Mars Attacks the Dice Game (no aliens included) contains the following: 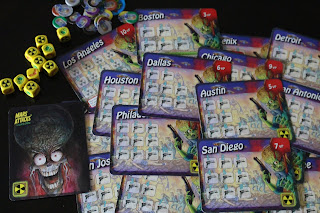 Mechanics
Mars Attacks the Dice Game offers players a quick and easy dice throwing game. Players take on the role of aliens attempting to gain control of the most locations and monuments. Locations are won by being the first player to roll the required number of ray guns per location (potentially over more than one turn) and martian heads per monument. But watch out, those pesky humans aren't just going to let you take over their world, dice that land on nukes can cause trouble. Each location can withstand a certain number of nuke symbols but if you roll over that number, the turn is over. Ray guns and martian heads can be re-rolled depending on the location/monument you are going for but may cause you to bust if you roll more nukes. The more locations you get, the more advantages you may have, as some locations and monuments offer the player special abilities. The game is played until one of the four location piles is depleted. 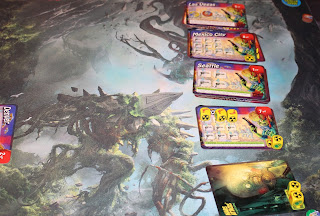 
We actually brought Mars Attacks out when we had a non-gaming relative over because he loved the theme. The instructions were short and easy to teach, making it a great dose of nostalgia and a good gateway game if you are looking for a quick game. We played several rounds of the game, trying different strategies to determine the best method of planetary domination. The answer, avoid the humans. While push your luck games can be fun, some of us, just don’t know when to quit. It is tough when a big city in within your grasp and you just need a few more ray guns. You anticipate the roll, hoping to maximize ray guns and minimize nukes. You shake your hand, blow into it like you are at a Las Vegas craps table, and throw. Realizing in a split second you beat the odds, all five of your thrown dice have turned up nukes and you busted... Defeated you think maybe you should get a hobby that is easier than planet domination I hear Martian crocheting is a good hobby. 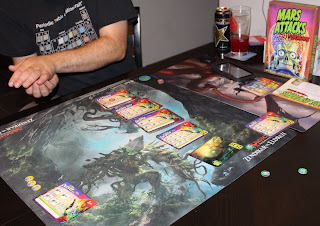 Mars Attacks The dice game was a quick and easy dice chucking game with extremely easy to play mechanics similar to that of Smash-up. You had to try and conquer the cities without getting nuked and before your other martian Comrades. Similar to Smash-up though, I found that the game lacked the player interaction that I wanted to see. It may have been because we were playing with three players but I found that there really wasn't much player interaction until we were competing for the final location. That said, the nuke pipes did add some great tension, where we really did question if we should push our luck to try and come out successful and often times it didn't go over so well.

We loved the theme, and I thought it was really original that you were playing the Martians trying to take over the world, instead of the humans defending it. Along with the theme, I thought that the artwork was great and really paid homage to the 1960s collectible trading card series that kicked off
Mars Attacks. I only wish that SJGs had decided to make artwork specific to each of the individual locations instead of generic artwork for all of the cards - they could have done some really cool things. Lastly, I wish they had included some non-American cities. While I like that they have one Canadian city, I think it would have been more thematic for the Martians to be invading London or Toyko than Oklahoma, Missouri.

Mars Attacks the Dice Game was a fun little game that would be good as a filler or on the go. It provides more meat than a game like Zombie Dice but doesn't take up as much room as something like Dice Throne or King of Toyko. The gameplay is similar to Smash Up offering players a push your luck dice game where players compete to control/ win locations and monument. All and all, this is an inexpensive game with cool custom dice that we look forward to playing again.