What's in the Box?
Typical of the CCG world, what's in the box depends on what you have bought. Similar to other CCGs, Steve Jackson Game's (SJGs) has put out a number of options when it comes to getting into Munchkin the CCG, with a Starter Box which includes a booster pack, two ready to play decks, and some tokens, counters, and a die; a Introductory Set which includes 4 booster packs, everything required to make 2 custom decks, and some tokens, counters and die; and individual booster packs for various additions which includes 12 random cards. We received: 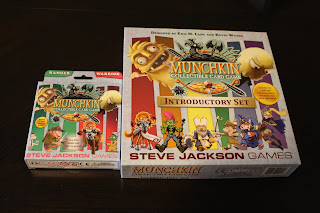 Mechanics
Muchkin the CCG  is a player vs. player collectible card game, where players attempt to be the last Munchkin standing. The game is played over a series of turns, with three unique phases:

The Warm-up phase: where players un-zap any/all zapped cards, reset the run away token, draw a card, and un-stash any currently stashed monsters (place them back into your hand).

The Munchkining phase: where players spend money or use the hero level to play loot, locations, allies, or monsters into your hoard, start fights (using a monster card), cheat, or play an instant card (mischievous cards). Cards played into your hoard help to defend against your opponent's monster cards, where monster cards played during a fight are used to attack your opponent and lower their health bringing you closer to victory. Cheating occurs when you bluff, by playing a monster card that you can't afford. If you get caught cheating, you lose the money you played and the monster is placed in your stash. If you aren't caught, then you successfully cheated, causing a player to run away from a battle that isn't real and wasting their run away token. 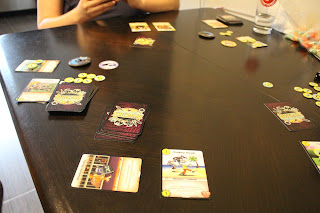 We played multiple games of Munchkin the CCG playing as the Centaur Warrior and the Halfling Ranger during our first couple times playing and then built a couple of decks from our Introductory Set. Similar to other CCGs it is nice that Munchkin offers players the option to build a deck or play with pre-made decks as I enjoy playing with pre-made decks while Caroline likes to build her own. The game played quickly and was interesting because as the rounds went on you knew exactly what cards your opponent had (minus their new draw for the round) but never knew what order they were going to play them in. This lead to some fun surprise attacks, sometimes Caroline would play a bigger card and I would run away only to find out that it wasn't the card I needed to run away from. Other times I would cheat and make it seem like I had another attack and force Caroline to use her run away token, not knowing I had cheated. In the end, Caroline won 2 out of the 3 games that we played using the Starter Set. 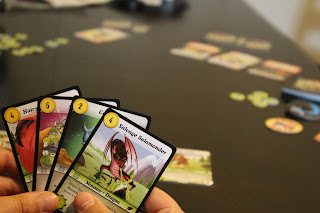 Munchkin the CCG offered what we would consider a lightweight CCG experience. While it has many of the same characteristics of other CCGs (MTG, Pokemon, Force of Will, etc.), Munchkins provides a more even playing field with a whimsical theme. Unlike other CCGs, where players can be limited by their mana/energy/money, Munchkin's combats this by giving all players the same amount of money to spend each round. This means that players are more evenly matched and can always make a move, unlike other CCGs. That said there can still be an interesting choice in strategy when choosing to play multiple smaller monsters, or one or two larger monsters, or choosing to add cards to their hoard. By limiting the spending power and making it the same between players it means that depending on the draw for monsters, players are often very fairly matched making it so the gameplay is relatively consistent between games.

The use of the cheating/bluffing mechanic was a rather interesting mechanic that I have not seen in many other games, but one that I had trouble mastering. By paying fewer coins than the card was worth I found it was hard for the opponent not to call the cheat. Caroline was less likely to run away because she knew that a lower cost monster would have a lower attack value. For me, I think the mechanic wasn't 100%, that said, Cody used it efficiently multiple times so it may have just been me.

With hilarious cards and great artwork, Steve Jackson Games takes Munchkin to a whole new player count. If you are a fan of Munchkin and are looking for a two player game, this might be the game for you. While I sometimes found that Munchkin could drag on when players refused to let someone win, this game doesn't have this issue. Munchkin the CCG still has the funny and often 'take that' aspects of the original Munchkin game but there is no way to heal (at least that we have seen) so players are constantly whittling away at their opponent's health to be the last one standing.

As a collectible card game, Steve Jackson Games will likely offer many of the familiar Munchkin expansions and offshoots that players are used to and personally I can't wait to see a Cthulhu addition. If this game spurs an intense interest in CCGs then welcome to the club and check out some of our older posts. This game is already starting to take off the Desolation of Blarg expansion came out in May. In August there is an expansion coming out called Fashion Furious and In November another expansion called Grave Danger, all something to keep an eye out for in your FLGS. 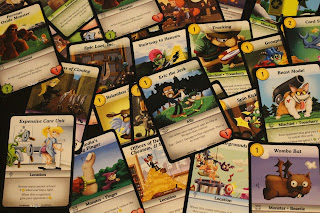