The review copy of Stupid Users: Beta that we received is made up of 167 cards. The cards are split into three different types - an I.T. deck (white), a Zombie deck (black), and Champion cards (unique player cards). It should be noted that each individual champion has a set of both I.T and Zombie cards that get added to each deck when you choose to play as that champion making for some unique gameplay, and greater replayability.

The components themselves were well made. The cards had an easy to follow layout, with card power on the top right, a picture using some cool original artwork, and special abilities outlined in the textbook. While the cardstock was a little thin, it is likely that the actual version of the game will be a thicker as this was only a prototype. One thing that I will point out is that the game used an air of sarcasm and wit that wasn't always appreciated. Some of the cards I really enjoyed and had a bit of a chuckle with, but there were a couple cards where the humour wasn't quite on the mark for me personally. For example, the only female Champion was dressed a little provocatively and the card said, "Sorry, I don't speak nerd". As a woman and a nerd, why do the women have to be portrayed that way, and why is she even in an I.T specific game if she knows nothing about I.T? (Rant over)

Another interesting point is that the base game only comes with 4 champion cards. While advertised as a 2-6 player game, the base game only offers a 2-4 player game. To be able to play with 5-6 players backers will have to unlock a stretch goal. So for those of you looking to play with a higher player count make sure that you keep track of where this game is with funding, $17,000 will get you that sweet 5-6 player count. 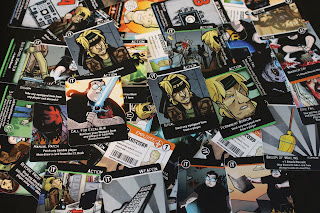 Stupid Users: Beta offers players a semi-cooperative "take that" card game. Yes, this may sound like an oxymoron, but really, when there are zombies involved it really is every man for themselves when it comes down to life or death. While players may work "together" to stop an AI character called Der Magiker (DM) from winning, the first player (including DM) with 10 minions in their army or the first to collect all 4 BETA artifacts is the winner.

The game is played in a number of rounds where players will do the following:


But wait, that isn't the entirety of gameplay. If a player draws an infected card, they turn into a zombie and collect zombie cards instead. While the gameplay for zombies is different from a regular Champion, you can still win as a zombie. 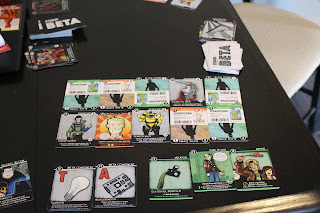 Stupid Users Beta gave us a bit of a rough start for the first couple of games. As is normal with Prototype games, the rulebook isn't clear as it could be, making our first couple of plays a little clunky. Once we worked out how the game was supposed to be played with a little I.T help of our own from the designer we were back on track to kick some zombie butt!

During the first couple of games, Caroline turned into a zombie and crushed it creating a massive zombie minion army. In the last game, we played Cody turned into a zombie and took home an easy victory. During one of our games, we managed to have just the right card combinations to get some back and forth going with instant actions to block each other from recruiting each other's minions which was rather fun. 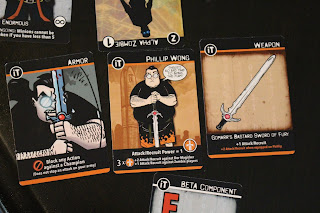 Stupid Users: Beta provides players with an interesting twist on a classic theme - zombies, but this time, duking it out with I.T people for the survival of Giganticorp and the world. This theme seemed interesting on the surface but was a little confusing to us. While the idea of I.T vs Zombies is novel, the game didn't seem to really explore that theme, as well as they, could have. As a company, I would think that they would work together to stop a maniac like DM from gaining the B.E.T.A artifacts/ a giant army of zombie minions. Instead, the game turns into a nerdy popularity contest, where players are stealing each other's minions to try and win the game by having the most minions. While I didn't quite understand how this win condition is thematic to the game, I did like the use of multiple win conditions and the addition of an AI component. By having multiple win conditions it alleviated some of the issues that can be seen with card only games where it is 100% luck of the draw. If a player didn't draw any weapon cards or minions, they might be able to pick up the B.E.T.A artifacts. This win condition seemed significantly more thematic, as players were trying to stop DM from collecting them by getting them first.

Lastly, let's talk about the zombie in the room... We both thought that it was very thematic and cool that when infected, players weren't out of the game but instead became zombies and began to collect a horde of zombie minions to win. While this has been seen in larger board games, I don't think there are many smaller card game that implements this type of mechanic. I really did enjoy this mechanic in theory, but one thing that I will say at least from our playing is that if you get infected you will win. The zombie cards are significantly more powerful and offer the zombie player quite the advantage with special abilities for every zombie. This may be thematic in the sense that zombies would likely win, but we found that it made the game less fun for the non-zombie player. This may play differently if both players were infected or at a higher player count where players could team up on the zombie player but at 2 players it seemed that the zombie always won. 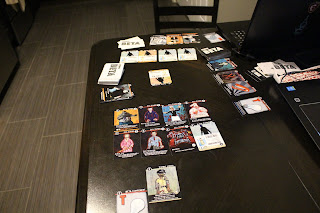 Final Thoughts
Stupid Users: Beta, a game that offers a neat twist on a classic zombie theme. With cool artwork and often witty sarcasm this quick filler card game offers players the chance to grab their I.T friends/co-workers and kick some zombie butt. While you may be working together to stop DM and his diabolical plans, make sure you keep your cubical buddy in check because while you may be doing what needs to be done for the team, they are likely stealing your team. If you are interested in this 2-4 player "take that" game make sure to check it out on Kickstarter, starting September 4, 2018.