What's in the Box?

The review copy of IN:FLUX that we received included the following:


As is typical with review copies of Kickstarter games, it is likely that what we received may be a little different from the final product, but let's take a look. We really enjoyed the quality of the components that we received, generally, hex games are made on cardboard that can easily get a damaged with multiple plays, but In:Flux was printed on a high-quality plastic/foam that made it seem a little more durable than what we are used to. The individual drones/special units were the same punchboard material, while buildings were made of wooden pieces. This provided some great component quality and while initially, we weren't the biggest fan of the size of the drones (they can be a little tricky to manoeuvre around the board) we did like that they easily fit on the spaces allowing for the buildup of your army on a single tile. 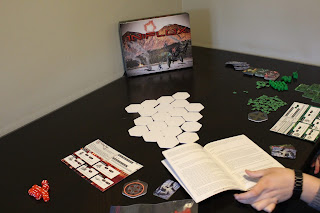 IN:FLUX offers gamers something that we have rarely come across, a quick and easy to learn, teach, and set up strategy war game. The game plays over multiple rounds until a player either defeats all other players by taking over their HQ or by accomplishing their mission before any other faction. The game is played in two phases:

1. Build - in this phase of the game players gain income based on current buildings and technology, choose an area of the board they wish to expand to, build buildings, armies, and/or technology. This is probably the biggest phase in the game as the most will happen and you need to prepare a strategy for what you will do next. Will you build a factory to increase your income or a reactor so that you can have more drones/special units? Or take a different strategy and unlock more of your tech tree? These decisions can really affect the outcome of the game and while the decision may seem quick and easy it can easily lead to defeat. 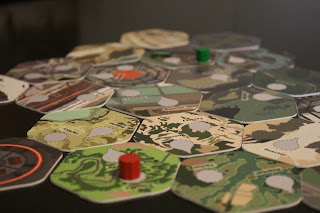 IN:FLUX provides players with an interesting and unforgiving strategy war game. We enjoyed building up our armies and trying to mess with each other. I personally enjoyed the background on the different factions and that while each faction had a specific goal that made sense, you could also try and win by taking over the other player's HQs. In fact, my favourite part of gameplay was the first time that we played and I rushed Cody's HQ early in the game and while I struggled to roll a 30 managed to win the game. This strategy did not work more than once though. 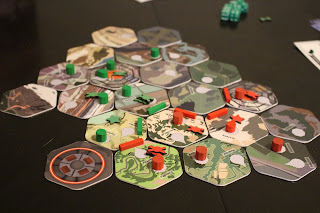 IN:FLUX offers players an interesting board gaming experience through area control, light economics, and world domination. The game is quick and easy to learn and fast to set up, making it significantly easier to get to the table than other games in this genre. However, the quick to learn rules and easy gameplay also makes this game very unforgiving. While many of the other dice-driven combat games use a combination of other mechanics to make combat a little more forgiving and less luck driven, IN:FLUX relies on a roll and kill mechanic. The player with the most drones/special units will have the most die to roll and the player who gets the highest roll wins the combat, killing all the opponent's drones/special units and buildings. This makes the game a little less strategic and a lot more luck driven, there is no real ability to pull a surprise attack, instead, you are just hoping for your opponent to have a bad roll (which can be very frustrating for them).

That said, I really enjoyed the semi asymmetrical powers and victory conditions of each of the four factions. By creating these four different backstories and making their tech tree, buildings, and victory conditions different it made us feel more immersed in the game we were playing and the game more thematic. While I think that playing as the Genesis faction made it very difficult to win via the special victory condition (just too much involved and too expensive compared to the other fractions) it was fun trying to storm the opponent's HQ. 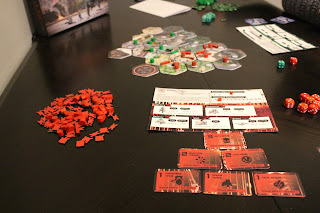 Final Thoughts
IN:FLUX offers players a gateway into deeper strategy war/area control games while ensuring that newbies don't feel overwhelmed by the long setup, playtime, and rules that often accompany this sort of game. Both the theme and the quick and easy setup, playtime, and rules make this game great for people looking to test the water into heavier war games/ area control games. While the mechanics make this game a little more luck driven than we would prefer in this type of game, the interesting theme and great components make the game fun an interesting to play. Check out on Kickstarter.